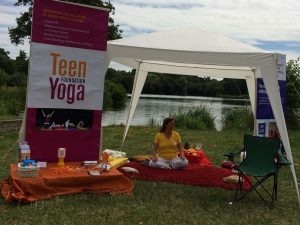 At the beginning of July, the Teen Yoga Foundation had a tent at the World Yoga Festival in Reading. This is an event that was first held in 2016, with great success, but we had been at another event at Alexandra Palace. This was only the second time we had been present at an open air event of this kind, and we were interested to see to what extent it was worthwhile to have a presence at this kind of festival.

We go every year to the OM Yoga Show in London. That has quite a commercial focus, very like a trade fair, most of the exhibitors are present to sell yoga products or services, and the atmosphere is quite rajasic. People often seem overwhelmed by the volume of activity and stalls to see and their visits to our stall are brief. We frequently only have time to hand them a leaflet, and hope that later they may read it!! This quick turnover of visitors is good for reaching a lot of people in a short time, but less effective in giving people the whole picture of what we do.

The World Yoga Festival is a more sattvic space. There is more emphasis on yoga philosophy, and longer sessions. It is more like a retreat than a trade fair and this was very welcome. We were lucky enough to get a pitch by the lake, close to the main intersection between the different spaces, the food area, and the field with most of the activities, and the campground. Everyone could see us as they walked and we were some way away from the (small) number of sales tents. This meant people visited us at their leisure, and the visits were longer and more leisurely. We had set up the tent as a space to sit down on the ground in the sun, and talk. We were able to have longer, more involved conversations. We may have met fewer people, but they were conversations rather than brief encounters.

We spoke about all the things we do, but especially about the Instill conference and Peace Day, which we hope that many who visited will take part in, and tell other yoga teachers about. It was quite a beautiful weekend, we will be going again next year and would encourage everyone to join us!!! 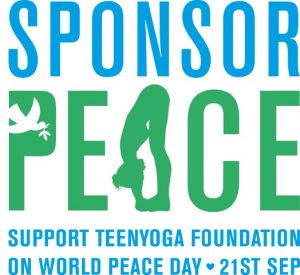